In August 2016, Rockhopper acquired a portfolio of production and exploration assets from Beach Australia. 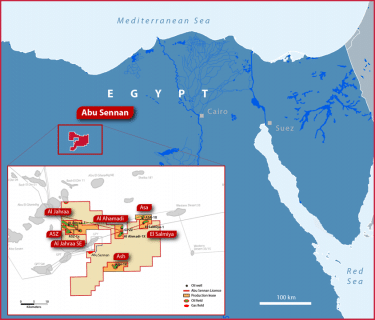 Production from the six development leases within the Abu Sennan concession increased during 2018 with production during the period averaging approximately 813 boepd net to Rockhopper (2017: 760 boepd). Following successes in the 2018 and 2019 drilling programmes, total gross production increased to 1,130 boepd net to Rockhopper during the period to June 2019

The 2018 drilling campaign resulted in the drilling of successful infill oil producers at Al Jahraa-6 and Al Jahraa-10 and a successful exploration well at ASZ-1X. At Al Jahraa-6, success occurred in both the primary objective, being the Abu Roach-C reservoir, and with a new oil discovery in the deeper Bahariya section. The Bahariya formation was subsequently put into production and continues to make a meaningful contribution to overall volumes from the concession. In 2019 EGPC awarded development lease for Abu Sennan 6 which included the ASZ-1X discovery and the well is now on stream.

An active drilling programme for 2019 is underway including one exploration well, two in-fill oil producer wells and a second water injection well on the Al Jahraa field. The first of the in-fill wells, Al Jahraa-11, was successfully tested and completed and is producing approximately 787 bopd gross. Kuwait Energy, the operator, is seeking bids for the construction of a sales gas pipeline from Al-Jahraa field to the gas plant at El Salmiya.

The Company continues to see a material improvement in the payment situation in Egypt with a significant decline in outstanding receivables owed by Egyptian General Petroleum Corporation (“EGPC”).

In July 2019, Rockhopper announced the disposal of its Egyptian portfolio to United Oil and Gas plc for a consideration of US$16 million.